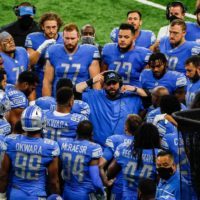 We have entered the final month of the NFL’s regular season, and with it a winter wonderland of spilled eggnog and broken sleigh bells. While a dozen teams dream about winning the Super Bowl, the rest of the league is forced to wonder how it all went so wrong. Here’s the list of who stole Christmas this year.

1) Adam Gase’s LinkedIn references: He was underwhelming in Miami. He is socially awkward. He is defiant in the face of reality. So how did Gase land a job developing a franchise QB? Many have surmised it was due to Peyton Manning’s glowing recommendation. It seems impossible that one of the game’s most cerebral players could have found a kindred spirit with Crazy Eyes Gase, but somehow he landed with the Jets and Sam Darnold isn’t the only victim of it.

2) Dak Prescott’s knee: When his ACL blew out, the Cowboys’ season unofficially ended. The only reason it’s still flickering is the debacle of the NFC East. Prescott’s play-making may have camouflaged the weaknesses of his coach over an entire season. Mike McCarthy’s defensive staff is a nightmare, his play-calling is bizarre, and the Cowboys can’t seem to establish any identity. In this awful division, with a former starting QB under center, Dallas had a chance to still easily earn a home playoff game. All it would’ve taken is some decent coaching. They didn’t get it, and Prescott’s injury exposed that weakness.

3) Arthur Blank’s loyalty: It was two years too late when the Falcons finally fired Dan Quinn. It’s been a steady decline since leading the Super Bowl by 25 points over the Patriots. The talent has been solid, so it may have been a mistake to fire Thomas Dimitroff, too. But Quinn’s support in the organization was misplaced. Since Raheem Morris took over, the Falcons have become winners again. That’s not a coincidence. They wasted the last two seasons waiting for Quinn to prove he was something he’s not.

4) Joe Burrow’s ACL: He was soaring. He was likely the Offensive Rookie of the Year. He made (gasp) the Bengals entertaining. It all fell dark when his knee got ripped up, and into the morass Cincy again sunk. The Bengals were not in the playoff hunt even with a healthy Burrow, but he sure gave fans reason to watch every week. The arrow was pointed up, way up. Now the final month is just spent dreaming of September.

5) The Eagles offense: It would be reasonable to blame Doug Pederson’s scheme, Carson Wentz’s scattered play, or the offensive line’s tissue softness. But when you combine all three of those, it makes for a waking nightmare. Philly had the door swung wide open in the NFC East. A merely competent offense would lead the division by three games and be sailing into a January home game. The fact the Eagles have the worst odds of making the playoffs as they duel against Andy Dalton, Alex Smith and Daniel Jones (or Colt McCoy) is unforgivable.

6) Ryan Pace: Nothing is as aggravating for Bears fans as realizing a wonderful defense was left with only Mitch Trubisky and Nick Foles as their offensive solutions. Trubisky has been a total mess since the end of his rookie season, and Foles was more of a “let’s wing it” answer than grounded in fact. Both have been putrid, calling into question Matt Nagy’s coaching ability. But the idea Pace gave away all those draft assets for Trubisky instead of Patrick Mahomes or Deshaun Watson, then supplemented it with only Foles, is diabolical.

7) Matt Patricia’s ego: Another Patriots assistant, another failed NFL head coach. Patricia once wore a Roger Goodell clown shirt after the Super Bowl. He pointed the finger at the situation he inherited. He drove away veterans and team leaders. Patricia, like so many Belichick wannabes, assumed he had graduated with a doctorate in Football Genius. He proved to be just the next Eric Mangini and Charlie Weis. His remedial degree sunk the Lions like so many before him.

8) Jimmy G’s charm: If he didn’t look like a male model, smile and wink so handsomely, would we insist he could be a franchise guy? Would the Niners have still assumed he deserved all that cash? Certainly he looked the part on the field winning his first five starts with San Fran. But ever since he’s been a limited passenger, and a hobbled one at that. The Niners have dealt with a rash of injuries, and the inconsistency of Garoppolo couldn’t save the season. His own injuries have derailed another season and will force some tough decisions this offseason.

9) Bill O’Brien’s control issues: Did someone say arrogant former Pats assistant? He was entrusted with building a winner around Watson, and he failed. Trading away DeAndre Hopkins looks crazier every week. More importantly, he lost the belief of his locker room. Aside from Belichick, no coach should have GM power (and even the Hoodie’s personnel prowess is in question this season). O’Brien wanted all the control. He got it. He ruined it. Now the Texans have wasted a year of Watson and J.J. Watt together.

10) Anthony Lynn’s clock management: Chargers fans could easily be dreaming of a fun playoff run with one of the most exciting young QBs in the league. But Justin Herbert’s sensational rookie season has been marred by defensive breakdowns, and curious coaching decisions. The two-score leads L.A. has blown this year are stupefying, although nothing can match Sunday’s hatchet job of the clock by Lynn. His management of the final minute in Buffalo on Sunday hangs as a Picasso of Pathetic in the Hall of Fame.