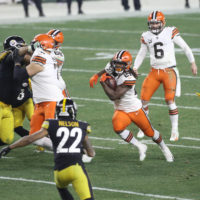 Wild Card Weekend has buzzed by us on the freeway, Baker Mayfield and Marcus Peters wagging their tongues through the windows of a convertible. Here’s the half dozen most interesting storylines that grew out of the first weekend in history with six playoff games.

1) The Browns changed their reality, while the Steelers are stuck in theirs. It takes doing it just once for everyone’s expectations to pivot on a dime. The Seahawks were a franchise that could never win the big one until 2013, and then enjoyed “Super Bowl favorite” status for years. Cleveland isn’t there yet, but we won’t ever be able to say this group is too raw, inexperienced, or historically tortured. It’s likely the Browns season comes to a halt next week at Arrowhead but dumping a truck of turnovers and touchdowns on top of Pittsburgh exorcised a lot of ghosts. Thus the Steelers created more of their own. Last month, I said the Steelers had unsolvable problems. A decade without a Super Bowl appearance is a long time in Western Pennsylvania, Mike Tomlin got outcoached, and Big Ben served up a platter of interceptions. There’s no better option on the roster at quarterback, and the Steelers don’t have a high pick. So Tomlin and Ben will likely return again, but the future looks a lot like the present.

2) That may be the worst loss of Russell Wilson’s career. It will certainly not be the most memorable. Nothing will ever top the interception at the goal line against the Patriots that altered history. But that year, Wilson had been great in the divisional round against Carolina, then led the Seahawks to a chaotic, frenzied comeback in the NFC Championship over the Packers. In the Super Bowl, he threw two touchdowns and handed the Legion of Boom a 10-point lead in the fourth quarter. Saturday against the Rams was a far more dreadful all-around afternoon. Wilson threw the disastrous pick-6 and found himself down 30-13 in his own building. Sure, the normally raucous 12’s were not allowed in the building, but the Seahawks offense has been lethargic for months now. Going 12-4 and being pounded in the Wild Card round by a Rams team relying on Jared Goff’s broken thumb is a terrible look. Wilson and the Seahawks are 3-5 in the playoffs since the Super Bowl loss and haven’t advanced past the Divisional Round.

3) The Lamar Jackson criticism was so premature. After coming back from a 10-0 deficit on the road against a team that supposedly had his number, the Ravens leader slayed a lot of dragons in Nashville. People who claimed Jackson couldn’t win a playoff game were working from an embarrassingly small sample size. Two losses doesn’t define a career, especially when in one of them he produced 500 yards of offense. Last January was an ugly 28-12 loss to Tennessee as the top-seed, but Jackson threw for 340 and ran for 160. Hard to suggest he couldn’t get it done in January with that type of output. It took until Peyton Manning’s sixth year to win his first playoff game. Jackson has been there in all of his three seasons, and shed that silly narrative Saturday,

4) The Nickelodeon simulcast was a big win. Much of sports media Twitter shifted over to the Nick feed since the Bears/Saints game was so gruesome to watch. Anything to take your mind off of another Mitchell Trubisky check down. It was a revelation. Kids loved the slime zone, the cartoonish graphics, the teenagers on the call, and adults enjoyed the overall fun of the broadcast. Noah Eagle and Nate Burleson gave the football action respect, but they also could laugh at themselves and each other. Getting young people to sit down and watch a game on TV is harder than ever. The NFL found something here.

5) Josh Allen is oh-so-close to making people pay. On the field, Allen has been an MVP candidate. He’s helped the Bills to their first division title since the mid-’90s and erased much of the questionable decision-making that haunted his early career. Against the Colts, he flung a beautiful touchdown to Stefon Diggs and bounced off defenders for a jump pass score. Call it the “Tim Te-Bill.” But he also nearly had the nightmare turnover. With a three-point lead, Allen had a 1st-and-10 from the Indy 34-yard-line. Just don’t do anything stupid there and the Bills are lining up for a 50-yard FG to extend the lead to six. But Allen’s propensity for empty-headed choices reentered the picture. With pressure coming down upon him, he tried to take on the defenders, bounced off a pass rusher and then fumbled the ball. The Bills averted complete disaster by recovering, but it created 2nd-and-33 and the FG was no longer an option. Had the Colts recovered, they would’ve had the ball in Bills territory and almost 3:00 left. The Bills hung on, but that play shows Allen still has some bad old habits. The critics that have always bashed him still have ammo.

6) The expanded playoffs worked… kinda. Adding a Wild Card team in each conference means there will be squads that don’t belong every so often. This year it was the 8-8 Bears. (Editor’s note: 7-9 Washington certainly didn’t belong either, but the old format would’ve also rewarded them for winning the division.) The new format also gave us a deserving team that would’ve been sitting at home (Indianapolis) and a true advantage for the top-seeds. Knowing only the Packers and Chiefs earned the right to watch the chaos unfold from the safety of their couches is a huge incentive. Three games on each day felt right, not oversaturated. The NFL’s strategy produced another smart innovation, even if it meant having to watch three hours of Trubisky.