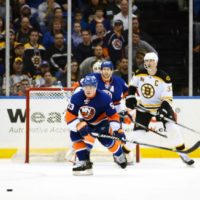 Nelson said: “It was awesome. The place was rocking tonight. The fans were feeding us energy. The team played great. One of those nights (coach) Barry (Trotz) touched on after the game, you’ll always remember moments like that. That was a big game, a big team effort from everybody.”

The Bruins, who reached the Stanley Cup Final two years ago, were eliminated in the second round for the second straight year. Bruins coach Bruce Cassidy said of the Islanders: “They’re a good defensive team. They manage pucks clearly better than us. We’re not getting those free chances they got in terms of mismanaging pucks. They do play a good game that way, they don’t beat themselves.”

UNIONDALE, N.Y. (AP) – The New York Islanders got another big second period and ran past the Boston Bruins for a return trip to the Stanley Cup semifinals. Brock Nelson scored twice in New York’s three-goal second, Semyon Varlamov stopped 23 shots and the Islanders beat the Bruins 6-2 in Game 6 on Wednesday night in a front of a raucous home crowd at Nassau Coliseum.