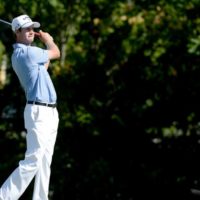 Harris English birdied on the eighth sudden-death playoff hole –hole No. 80 –to defeat Kramer Hickok and capture his fourth career PGA Tour victory, and his second of 2021.  The eight-hole playoff is tied for the second-longest in PGA history (sudden-death format).

Marc Leishman finished third, one stroke off the lead. Abraham Ancer was fourth at 11 under, followed by a group of five golfers at 10 under highlighted by Brooks Koepka.

English now sits second in FedEx Cup standings. He’ll be looking to top a career-best of 15th in next month’s Open Championship.