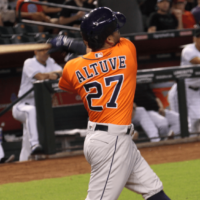 The Astros are the third team ever to appear in five straight league championship series, and first to do so since the Atlanta Braves reached eight straight from 1991-1999. It’ll be Houston’s second ALCS under 72-year-old manager Dusty Baker. Baker replaced A.J. Hinch, who was fired in fallout from the Astros’ 2017 sign-stealing scandal.

Game 1 of the ALCS against the Boston Red Sox will be held on Friday in Houston. The Red Sox eliminated Tampa Bay with a 6-5 victory in Game 4 on Monday night.

We are closing in on the first pitch of the Braves-Brewers game. The Braves will be without Jorge Soler for the rest of the series after he tested positive for COVID-19. You can read more about that here: https://www.cbssports.com/mlb/news/braves-jorge-soler-tests-positive-for-covid-19-cristian-pache-approved-as-playoff-roster-substitute/